As part of the online talent sourcing research I was doing recently, I rediscovered some data (a few years old now) from which I was able to extract the following chart – plotting the number of times CVs were downloaded over time, based on their age.  If you assume (a big assumption) that the popularity of a CV equates to its economic value, then you can extrapolate the value of a CV over time. 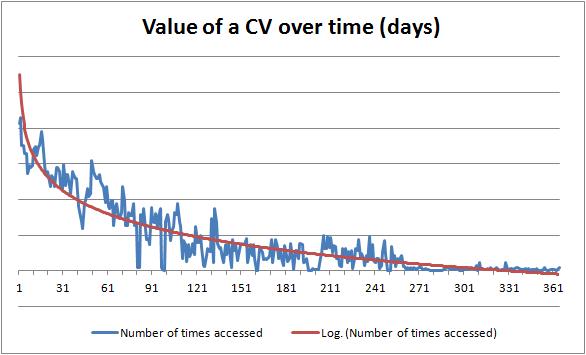 It was only tangentially relevant to my research, so I didn’t include it in there, but I thought it was quite interesting and posed questions for both jobseekers and those whose businesses are based around reselling CV data.  I’ve removed the # scale to protect confidentiality, but it’s a reasonably-sized data set, which shows a clear trend.

The trend is presumably driven by both the jobseeker behaviour of regularly refreshing their CVs on job-boards and contacting recruiters repeatedly; and also the recruiter behaviour of focusing on the freshest CVs. I wonder whether it also reflects the unemployment issue of stale candidates left on the shelf.  There’s obviously a real opportunity in effective mechanisms for data refreshing/enhancement, which is where LinkedIn, Facebook et al have demonstrated genuine leaps forward.

I can’t say whether this is representative of the industry as a whole, or whether things have changed in the very recent past, or even whether the original data was 100% accurate … so it is presented “as is” rather than as empirical evidence.